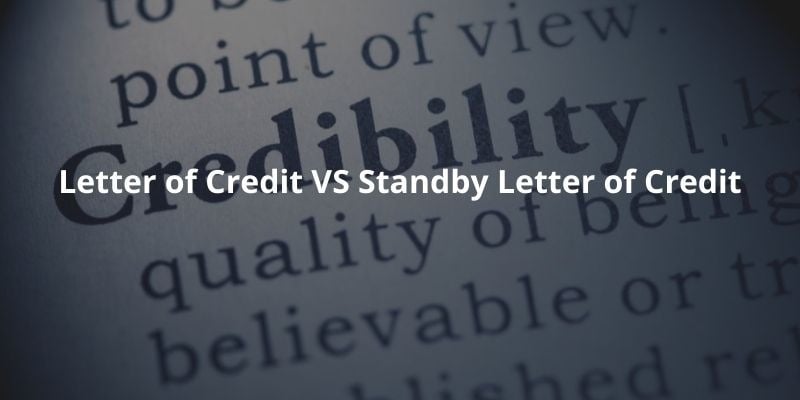 Can I Terminate a Contract for Another Party's Breach? 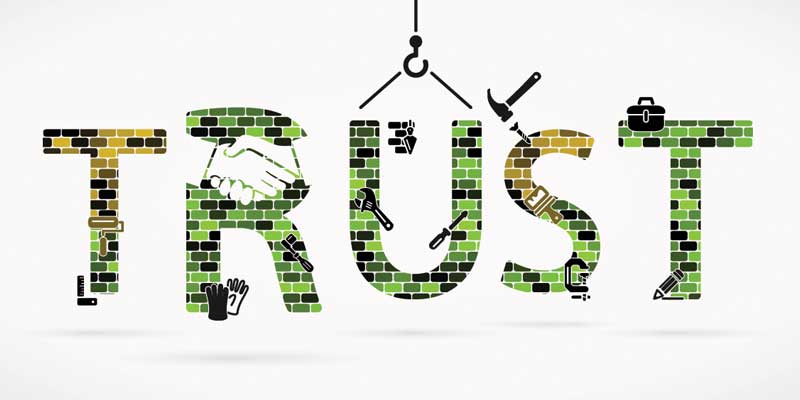 A Letter of Credit and a Standby Letter of Credit sound extremely similar, but are they similar in nature or are they wholly different? These two bank letters of credit have been used in commercial trade transactions for a long time. They come in two basic types – Documentary Letters of Credit (which is also known as Commercial Letters of Credit) and Standby Letters of Credit. While they share a similar name and both types of letters are created to assure the parties in a commercial transaction that contractual obligations will be honored, the two have fundamental differences and have distinct purposes.

1. What is a Letter of Credit?

Documentary Letters of Credit are irrevocable and constitute a definite undertaking of the issuing bank to honour a complying obligation. They are mainly used as a payment method in international trades, for the export and import of tangible goods in international trade. They are used to promote trust in transactions, especially for international dealings which involve factors of distance, knowledge of each other and differences in legal systems between the parties.

2. What is a Standby Letter of Credit (SBLC)?

B. Difference between Standby Letter of Credit vs. Demand Guarantee

SBLC is similar to a demand guarantee where the seller can draw from the SBLC should the purchaser fails to pay. Therefore the bank's liability is secondary in nature. Demand guarantees are used to underpin non-monetary obligations in international transactions, such as the obligations of contractors in construction contracts. However, they are rarely used by the purchaser for assurance against non-payment obligations and are usually preferred to protect against the risks of delivery of the seller.

In the US, SBLC is more frequently used instead of demand guarantees because of the sensitivity of the word "guarantee". SBLC is more an all-purpose financial tool used to support financial as well as non-financial undertakings and transactions. They have also been used on securities issuance to get a higher credit rating on the securities.

SBLC acts as an additional safety net for the seller as it ensures that even if the purchaser is unable to pay the seller, payment will still be made by the bank. That is to say, even if the original purchaser is unable to pay the seller (e.g. because of a cash flow difficulty, bankruptcy, fraud etc). As such payment through an SBLC is usually one of last resort and is ideally never used. 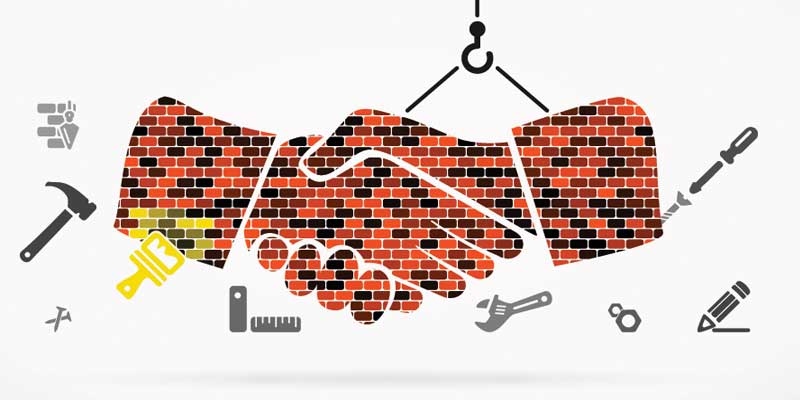 How does a Letter of Credit works?

A Letter of Credit is a plain payment instrument. It has basic clauses such as documentation, packing, warranty etc. Usually, under the letter of credit, the issuing bank will agree to pay the seller given that the seller can present specified documents relating to those goods. They are issued at the request of the purchaser in favour of the seller.

Almost all letters of credit relating to international trades are expressed to be subject to the Uniform Customs and Practice for Documentary Credits (UCP) published by the International Chamber of Commerce (ICC). For demand guarantees, they are normally under the ICC Uniform Rules on Demand Guarantees (URDG):

How does a Standby Letter of Credit works?

A Standby Letter of Credit, on the other hand, has specific performance clauses that the seller must fulfil so he can use this instrument and claim from the bank in case the purchaser is unable to pay. The bank's payment undertaking, though primary in form, is not properly invoked unless the purchaser has defaulted. The 1983 version of the UCP were extended to SBLCs. Some SBLCs are also subject to International Standby Practices (ISP) published in 1998:

As an example, Bob would like to purchase 1000 snow globes from Carrie. Carrie does not want to take the risk so she asks Bob to first obtain documentary credits from a bank in case he is unable to pay. Bob can either provide (i) a letter of credit; or (ii) a standby letter of credit from Bob's bank.

Bob can get his bank to issue a Letter of Credit to Carrie's bank. In order for Carrie to draw from the Letter of Credit, Carrie needs to submit the documentary proof that she has shipped the snow globes i.e. bill of lading and other shipping documents. The bank will review the documents submitted and verify its authenticity. Once verified, Bob's bank will honour its obligations by making a payment to Carrie's Bank.

Alternately, Bob may ask his bank to issue an SBLC to Carrie. Bob is primarily obligated to make payment to Carrie upon the shipping and delivery of the snow globes. Carrie will only draw on the SBLC should Bob defaults on its payment obligations and such obligations would then fall on Bob's bank. 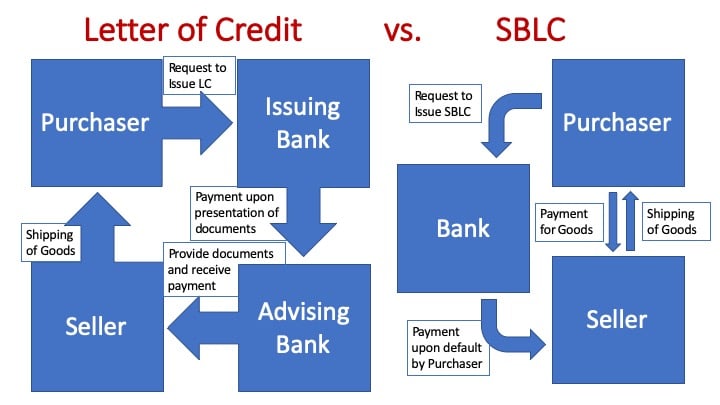 Issuing banks would agree to pay up to the value of the letter of credit. It is very favourable for the seller since it is second only to getting cash. Demand for letters of credit fluctuated over the years depending on whether it is a sellers' market or a buyers' market. Ultimately it is the degree of confidence felt by the seller on the creditworthiness of the purchaser, which the purchaser's bank would be in the best position to check.

The banks incur charges for their services and the costs would be passed back to the purchaser, as such the purchaser may be unwilling to agree to payment by letter of credit. Fees Associated with Letters of Credit are as follow:

In practice, the seller may not require a letter of credit for:

(ii) purchasers that have developed a long term relationship of trust with the seller.

Whereas for SBLC, the bank as an obligation to pay sellers if purchasers are unable to pay. As such, banks will usually be more careful and will require collateral security from the purchaser first in order to issue an SBLC. Both letters of credit and SBLCs are generally short-term in nature, with common terms between 30 days to 1 year. They are also recognised as “Other Eligible Support” in the ISDA Credit Support Annex.

Letters of Credit are used as a primary instrument of payment for individual international trade transactions, so the goal is to use this letter to complete the transaction. The issuing bank is the party primarily liable and therefore the first port of call for payment. For Letters of Credit, they are usually used in simple sale transactions for security purposes e.g. shipping imports.

On the other hand, SBLC is a secondary instrument of payment that is relied on only when the primary purchaser is unable to pay. The bank's payment undertaking, though primary in form, is not properly invoked until the principal has defaulted. It is only when something went wrong that SBLC will be used, so the goal for parties is to ideally avoid this from happening. They are often used in projects to provide security. Moreover, with SBLC, banks have contingent obligations that arise from the letter. As such, SBLC do not support more discrete trade transactions as it does not involve the bank’s direct participation and thereby cheaper for the bank from a capital perspective. The Bank will act as an overseer to ensure performance and the completion of the transaction. 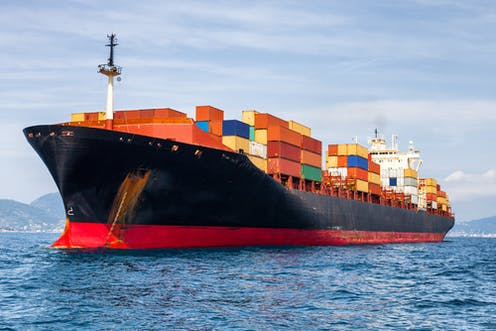 E. Why do we need these Documentary Credits?

In both domestic and international trading businesses, risk and trust are some of the biggest challenges major challenges. By using Letters of Credit, these legal, bank-issued documents are a huge help as a safety net for sellers and purchasers as they can help ensure compliance by both parties of the terms of their trade.

Moreover, given that they are accepted and acknowledged by many countries overseas, the use of Letters of Credit will also reduce the risk of doing business abroad and facilitate transparency and trustworthiness between parties who have never worked with each other before.

Documentary Credits can provide better clarity and transparency on the transaction, as all the terms of the trade and the goods and services involved would be defined in detail in the Letter. It will bring both parties onto the same page and thus provides additional comfort to the parties as it removes any possibility of miscommunication or differing expectations.

F. Who should use these Letters of Credit?

These Letters of Credit are crucial to businesses that engage in large-volume trades, both domestically, and cross-border. They act as safety nets to lower the risk of default due to non-payment from their clients, which in turn ensure that the company will be able to earn money and maintain its cash flow.  They are also very helpful in establishing trust between parties that have not worked with one another before.

Some factors may be considered when deciding whether or not to request a Letter of Credit:

G. Advantages and Disadvantages of Letter of Credit

This guide is to facilitate the understanding of letters of credit. It provides a brief overview of the two letters’ differences and is not intended to provide a detailed legal analysis, but rather it serves as general guidance on the most important matters to be taken into account when differentiating the two.

Please note that this is just a general summary of the position under common law and does not constitute legal advice. As the laws of each jurisdiction may be different, you may want to speak to your legal term.